Now the truth about plastics, drugs, toxic metals and pollution

on that is in our water, is NOW more public! Check out these interesting articles, facts and videos!

You Won’t Believe How Bad Pollution In China Has Become

“With a newly-minted elite and an economic growth rate of over 10 percent, the environment has taken a backseat in China, the world’s most populous country. Growing pollution has led to unusable waterways, increased incidence of birth defects, and some of the dirtiest air on earth. It’s so nasty that there’s now a word for it: “smogpocalypse”.”

“We all talk about the Stone Age, the Iron Age and the Bronze Age, but what era are we living in right now? People are starting to refer to us as the – far less romantic – Plastic Age. We make 288 million tonnes of plastic a year, and unlike paper, metal, glass or wood, it does not oxidise or biodegrade, instead it ends up in our oceans, making the ratio of plastic to plankton 100:1. The way to make use of The Great Pacific Garbage Patch? Bionic yarn. Co-designed by Pharrell, G-Star’s RAW for the Oceans collection is the world’s first denim line created from plastic that has been fished out of the big blue and recycled. Find out how we can pick 700,000 tonnes of plastic up off the sea floor in our documentary, made possible by G-Star, The Plastic Age.”

Tapped Out: A documentary about water. Published on May 24, 2015

“We think of water as being plentiful and dispensable. It’s part of our landscapes. It plays a role in religion. And it’s the essence of our very survival. We incorporate water into our cities to make them more beautiful. We find ways to play in it. And it enriches our lives. But we often lose sight of where water comes from, and where it goes after we use it. This documentary explores current methods of how water is supplied to our cities. How wastewater is treated. The issues with existing systems. Ways water districts are currently dealing with challenges. But we will also look to the future. How will we keep up with water demands as our urban centers grow while drinking water supplies become more scarce? And what options do we have to improve our current water infrastructure, to make it more sustainable and resilient to fluctuating climate conditions?” Produced & Directed / Filmed / Edited: Dave Vuono

Join filmmaker Pete McBride, a National Geographic Freshwater Hero, on a journey into the Fijian Highlands to discover why the locals said “no” to easy money from resource extraction, and how they turned to tourism to fund a conservation area that protects one of the most beautiful rivers on Earth.

Did you know about this??? 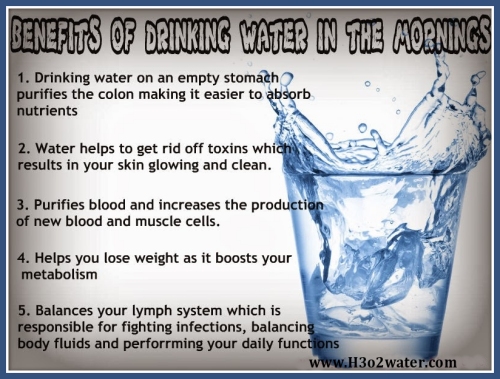 “A short film of a mini gyre filled with microplastics that Sustainable Coastlines Hawaii cleaned up in August 2017. Sadly, it reformed just a few days later filled with more microplastics and debris. It’s a stark wakeup call to the future we need to prepare for and the need to take action to stop society’s overuse of plastic now. Because if all we do is clean, that’s all we’ll ever do.”

“Antidepressants stood out as a major problem: These drugs or their metabolites were found in the brains of every fish species the scientists studied.

Here is a detailed report about the current water crisis in Milwaukee and hard facts about the condition that the people are in from the Midwest connect! Published on Mar 21, 2017

FYI: Here’s a couple of article about the same subject of pharmaceuticals in the water. http://www.pbs.org/wgbh/nova/next/body/pharmaceuticals-in-the-water/ 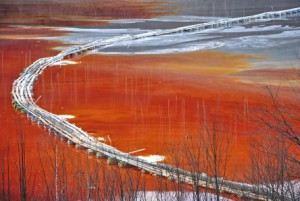 “In early March, states from New Jersey to California dealt with bursting water mains that flooded streets, consumed cars in sinkholes and left residents without water.

Across the U.S., aging pipes are breaking apart. The EPA estimates that approximately 240,000 water main breaks occur each year. Not only do these old pipes lose an estimated 14 to 18 percent of the nation’s daily water use and cost $2.6 billion in losses as drinking water pours into the streets, but the leaks also provide entry points for contaminants.

Aging pipes threaten water quality by leaching contaminants such as lead into the water they carry. Although lead pipes were banned by Congress 30 years ago, approximately 6.5 million remain in service according to the American Water Works Association. Chemicals are added to the water supply to prevent lead and other chemicals from leaching from the pipes, but too often a pipe repair or modification to the water chemistry results in lead exposure. In 2001, lead concentrations in Washington, D.C.’s tap water remained 20-times the federally approved level for three years after the city changed its water disinfection processes. In Flint, the change in water supply from the Detroit water supply to the more corrosive Flint River resulted in high levels of lead in the water.

Most of the drinking water infrastructure in the U.S. was built more than 50 years ago. In older cities, water pipes may have been in the ground for a century or longer. In Alaska, South Dakota and Pennsylvania officials believe that some communities continue to rely on historic wooden water pipes that once installed were never replaced.

The nation’s sewer systems are also severely outdated. New York City, San Francisco, Washington, D.C., Philadelphia and others, operate combined sewage systems to treat wastewater and storm water, but the capacity of these systems’ was developed for fewer people and before such extreme weather conditions. Therefore, the volume of water entering the system during times of heavy rain exceeds capacity and results in the discharge of billions of gallons of raw sewage into local surface water every year. This problem will continue as the nation’s sewer systems have not been properly invested in to support growing populations or to adapt to increasingly variable rainfall with the onset of climate change.”<Read more here>

A fragment of this great documentary on the available 3% freshwater worldwide and all problems associated with the use and abuse connected to this resource. This segment deals with the future situations as human population keep increasing and more and more water is needed for consumption, crops, factories, and so on. After all, almost everything needs water! Watch this clip from the movie ~

“Lately there’s been a lot of talk about Chinese air pollution; smog so thick, you can barely see the streets of Beijing. But what you might not know is that China is facing a major water crisis. Rivers are drying up and there’s not enough water to go around. And what little water there is has been so polluted by chemical and industrial run off, it’s undrinkable. And if the Three Gorges Dam didn’t cause enough trouble, the next great public work sure will. It’s called The South-North Diversion Project, and will link up the Yellow River with the Yangtze River, hopefully funneling water from the south to the water starved North. All it takes is drilling through the Himalayas.”

January 20, 2011 “The freshwater crisis is one of the greatest ecological issues of our time. Canadian author, activist, and co-founder of the Blue Planet Project Maude Barlow outlines the causes and dimensions of the crisis and offers a principle-based solution to a water-secure future. Barlow’s books include Blue Covenant: The Global Water Crisis and The Coming Battle for the Right to Water.”

A 11-week school project with the aim of raising awareness for the global water crisis in LEDCs. 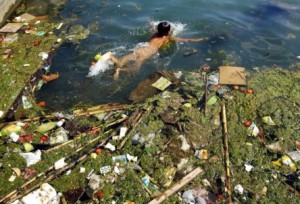 Have you seen what’s happening with the WATER in China?? Is our need to have CHEAP costing us way too much You Won’t Believe How Bad Pollution In China Has Become By Alec on August 27, 2014   Read more at: http://all-that-is-interesting.com/pollution-in-china     Residents look at the heavily polluted river that cuts through the city of Zhugao in Sichuan province. 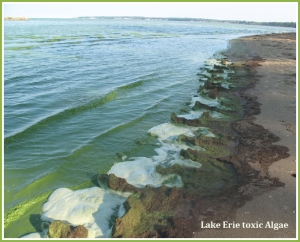 Residents of Toledo, Ohio’s fourth-largest city, spent the weekend under a water advisory after tests revealed toxins in the city’s water supply, likely caused by algae growing in Lake Erie.

“Tens of thousands of people kept faucets turned off and left their homes in search of clean water. They waited in lines at fire stations for bottled water, crossed state lines in search of stores with supplies after local outlets ran dry, and drove to friends’ homes miles away to fill containers.

Early on Saturday, municipal officials asked the 500,000 residents served by the city’s water system to stop using tap water after the toxins were found at a city water treatment plant. The orders were clear: Do not drink the water, do not brush your teeth or prepare food with it, and do not give it to your pets. Health officials also advised that children and people with weak immune systems refrain from using the water to bathe.” Read more online 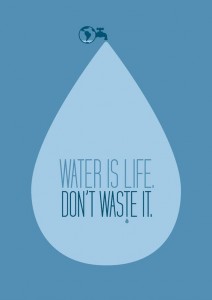 Water is becoming rare these days, droughts are spreading all over the world, water is disappearing at alarming levels and water wars are happening across the globe!  We need to know why and how we can help, before it’s too late.

Now we look at the quality of the water in those plastic bottles, many are just using tap water and selling it back to us! Also, what a waste that is just so unacceptable, use the plastic bottle once and throw away! Making our own Biotite H3o2 water eliminates the plastic bottle problem, and gives your body the pure oxygenated water it deserves and needs, it’s fresh and clean NOW.

When we just THROW IT AWAY … where is AWAY?

Here’s another issue of concern ~ FLUORIDE ~

Many cities and states are realizing the importance of removing this fluoride poison from our drinking water, why is it there? The indications from researchers are given this a thumbs down ~ our children are living with the results of this insidious additive to our water. We must act now, it’s all there on the internet, see for yourselves how the side effects are killing us. This video is a real wake-up call!

There are several excellent ways to clean the water, to structure it back to living H3O2 water that is safe for drinking.  Black Mica or Biotite is one way that we like best, it is used for water purification; it removes contaminants and toxins such as fluoridation, restoring it back to its natural state with ionic minerals. Some techniques use magnets, gemstones (such as tourmaline and obsidian) with aluminum filters, and other amazing and costly filters for the spiraling movement that oxygenates the water. It’s best to explore and see what’s best for you, there are many choices but “feeling” is very helpful with water, a time to trust your “feeling knowing“!

How does drought affect all of us? Food cannot be grown without water, just to name one thing, NOW is the time to act!

The coming water wars of the Western USA

Truth be told, much of the Western USA is in the same dire situation as Las Vegas. Cities like Los Angeles were founded in the desert, then artificially supplied with water that’s literally pumped over a mountain. If those pumps are halted for any reason, Las Vegas immediately reverts to a desert, and the city becomes a death trap for its millions of residents who rapidly discover they are living in a desert.

Even when the water is pumping, the entire state of California — yes, 100 percent — has already been classified as being in a state of “severe drought.” Imagine what this looks like without the imported water.

Phoenix is also a city that’s too large for its water supply. Nearby Tucson suffers much the same problem. Nevada, California, Arizona, New Mexico and Utah are all wildly unsustainable in terms of water supplies. They all depend in part on the Colorado River, but that River is also headed for imminent collapse.” 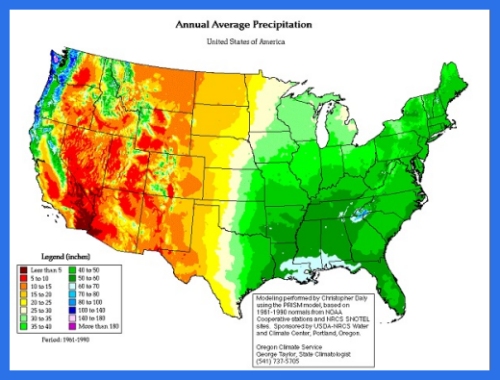 High population cities not sustainable in most of the Western half of the United States. To fully grasp the seriousness of this situation, you might find it useful to scan this rainfall map of the United States: Learn more: http://www.naturalnews.com/045790_Las_Vegas_water_supply_imminent_collapse.html#ixzz37gorcJkO